This blog post is not what I was intending to write, at least not so early in my list of blog postings. Mainly due to the fact that it’s main issue is around SARG-ability which I think is a bit more advanced than normal.

…by ‘a bit more advanced’ I mean any conversation involving me and SARG-ability would carry along these lines…
> Do you know what SARG-ability is?
>> Me? Yeah, totally!
> Great! What is it so?
>>…eh….indexes?

Which isn’t totally wrong but since SARG-ability is a main part of this post, it’s best I give you a definition and an example (BONUS: a lovely video!)

So a query is SARGable if “the DBMS engine can take advantage of an index to speed up the execution of the query.”

Now if this was a book and we had to search every single 15,000,000 pages of that book for the page with the result we want OR if we had the option to go to the back of the book, look up on the index where the the result is and go directly to that page, which do you think would be faster? Easier?

…I’m really hoping you went with the Index option…

Hence, in our example SARG-ability is good and it’s what we want to achieve today.

One of the most common things to search for in SQL Server is dates.  Nice and simple and everyone has (presumably) done it.

Fine, grand, no problem…if your table is small but remember, we’ve got a table with 15,000,000 rows. Checking every single row is just not going to cut it here.

Unfortunately that is what happened in this situation.
A requirement was given to Development to get all the rows where the date was this year, and Development were smart enough to know that there is a SQL Server function for that.

So they sent it onto me to approve and apply to the QA environment and I did what I have come to learn is what most DBA’s do to Developers, I said no.

Why? Here’s why?
First lets create a test table to run this against…this insert took around 2 minutes on my machine.

So now that 1). we have our table and b). we have an index we can use, we can run the developer’s query and be SARGable right?

…your row results may differ, random is random after all…

So being the kind, gentle, caring soul that I am (as well as being on my fourth coffee) I went back with a SARGable method.

But as beautiful as that index seek is, it is not what the developer saw.
> That’s an ugly query, it’s going to be horrible to troubleshoot that.
And off he went.

I was happy cause it was SARG-able and he was happy as it was easier to troubleshoot.
So he asked if it could be applied to the QA environment and I did what I have come to learn is what most DBA’s do to Developers, I said no.

In case you’re wondering why, consider two things: the data type of the [Test_Date] column and this example.

3 rows difference…I’ll let you figure out why.

There has been multiple times when I’ve been running part of a large query script and something has distracted me.

Next thing I know I look back at my screen and my results pane shows:

Now that might be fine if you’ve ran what I just ran:

Suddenly you’re not sure if you really ran the SELECT statement at all.
Maybe you ran the insert statement and 2089 rows were marked to never be seen again!
Or maybe that other table only had 2089 rows in it and you’ve now deleted every one!!

Now this blog post is not going to deal with fail-safe’s for preventing those scenarios because 1) you should already know how to do that, and b) if you don’t know, then maybe back away until you research it… It’s only going to deal with a nice little way you can figure out what it was that you just ran.

In SSMS, there are 4 different ways to deal with query results.

Now you may have noticed that for that list, I gave you the keyboard shortcuts for each option apart from the final one, and there’s a very important reason for that…

…I don’t actually know if it has a shortcut…

…check some of these other options out too, they’re pretty useful…

From here we can already see that I have that magical little checkbox “Include the query in the result set” ticked, and 3 check boxes down from that is the No Results checkbox “Discard results after execution”.

…if you want it to take affect, you’ll need to open a new Query Window…

Now seeing as I had that checkbox ticked, all I have to do is open the Messages tab in the results pane and there will be the text that you ran, your little WHERE_WAS_I.

…okay so I cheated, I ran the whole thing and only showed you part of the results pane. Sorry I’m not sorry 🙂 …

The good news is that now we know what was ran…EVERYTHING…but seeing as this is a massively contrived example…I mean who calls a table [very_important_table]…it works for what we want.
From this we can see

Like I said, it’s not a fail-safe but just a little nudge to let you know where you are. Hopefully it should help you out with knowing what it was that you just ran…even if what it tells you wasn’t what you wanted to see!

P.S. this is closest that I’ve found to a shortcut for this. If you click the Query Options button below and click the checkboxes that way it will also work but only for the session window that you are in! 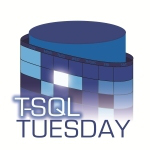